How To Become A Morning Person Last year I set for myself a million goals, and one of them was that I wanted to train myself to wake up earlier. I’ve never had a major sleeping in issue per say – it’s not like I would wake up at midday or anything. But let’s be honest, my morning routine didn’t make for a balanced and energised day. For example, I was generally waking up around 8.30, wolfing a quick breakfast and rushing to meetings or work, never taking the time to wake up and treat myself to a nice morning. Mornings were just rushing and a jumble and lets be honest, not that fun.

Come Jan first last year I decided that I was going to become a morning person, the type that springs out of bed early doors, excited for the day ahead, instead of one that snoozes for hours and then drags themselves out. Although I’m not quite a bright eyed and bushy tailed squirrel as yet, the little tweaks I made to my lifestyle changed my mornings completely for the better. I’m not saying it’s super easy, because to be honest I still LOOOOVE being in bed. But waking up at 6.30 instead of 8.30 has changed the way I think about my mornings and made me enjoy them so much more. It’s not so much ‘the early bird catches the worm’ for me but ‘the early bird does a bit of yoga, has a yummy breakfast, kisses her boyfriend and starts the day off on the right foot’. Either way it’s better than it was. And if I have the odd day when I don’t get up early, then it’s a treat rather than the norm! 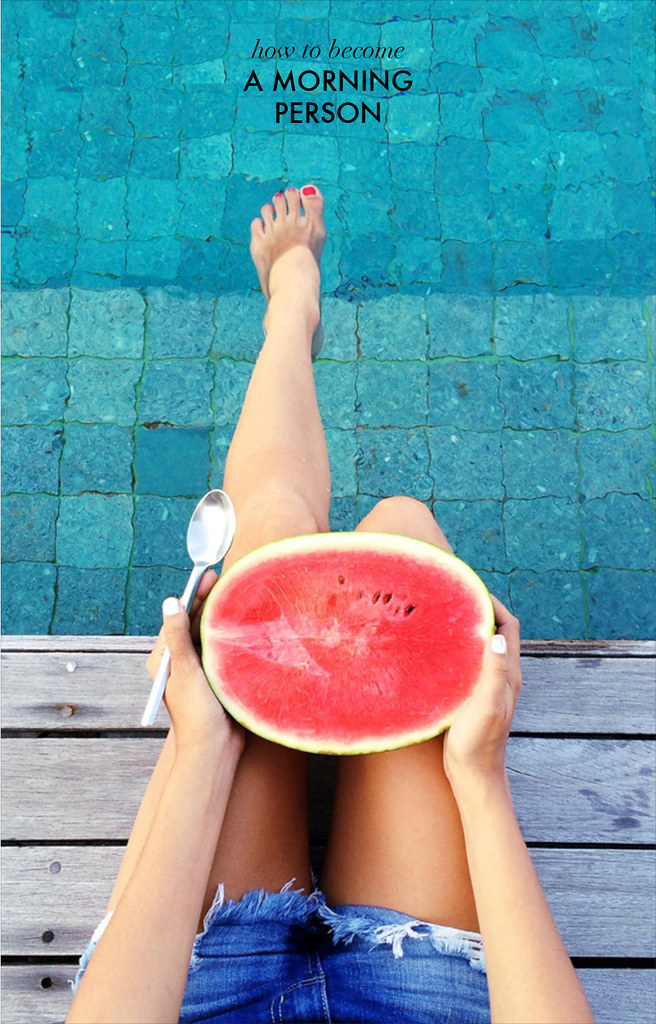 How to Become a Morning Person

Ok so in order to wake up early you need to get enough sleep. Obvious right? Our bodies are programmed to need a certain number of hours sleep per night, and although it probably differs between each person, I for one function better on 8 hours. This article backs me up on that one!  Your internal clock and the circadian rhythms of your body tell you when you’re tired, which means that if you’re a night owl, you’ll be programmed to go to sleep late and therefore probably wake up late too. A few years ago I would generally go to bed at midnight, which inevitably had me waking up at 8.30. In order to get up earlier, I needed to go to sleep earlier. So obvious! What you ultimately want to do is to change your internal clock, so you naturally fall asleep earlier and wake up earlier too. Knowing this, I forced my internal clock to change by making myself get into bed at 10pm, reading for a while and drifting off. I found that once I did that for a month or so, it was much easier to get out of bed when the alarm went off the next morning – obviously! Just start winding down your evening earlier and force yourself to get into bed, without your laptop! Reading will help you fall asleep, particularly if it’s a boring book 🙂

Get a better alarm clock

An alarm that wakes you BEEEP BEEEP BEEEP is the worst, and it also means that you’ll most likely turn it off straight away or press snooze over and over when the buzzing starts. So, in an effort to get past the issue of the alarm clock, at the beginning of last year we bought a radio alarm clock, one that you can tune into your favourite station (or spotify playlist if it has wifi) and be woken by the news or some fun tunes. I’ve found that this is way easier to wake up to, and actually helps you wake up. Ban yourself from switching it off and you’ll find you slowly wake up and stay awake.

Wake up at the right time in your sleep cycle

Ok so this one is something I think we can put down to the annoyingness of alarm clocks – which say YOU MUST GET UP NOW regardless of whether you’re in a light sleep or a heavy REM sleep. There’s nothing worse than waking up when you are in the deepest of sleeps – which is why I am so against the snooze button which wakes you up on and off without any recognition of what stage of sleep you are in. Hence why it’s better to wake up sans alarm if you can. But I know that’s hard. One option is the sleep app which you can get on iTunes and tracks your sleep cycle through your movement and can be set to alarm mode which wakes you up at the right time in your sleep cycle. BUT then you have your phone in the bedroom so you can’t win. I’m still all for music to wake up to because if you’re in a super deep sleep you’ll probably sleep a little longer and then wake as you come into a light sleep. Et voila!

Organise something nice to do, with someone else

Planning to do something with someone else, say a friend or family member, will help both of you wake up earlier. It’s easy to skip out on something I’ll be doing on my own, but when I know I’ll be leaving my friend Mattie waiting on the steps to do our peak walk, there’s absolutely no choice but to get up. If you can plan something like this say two days of the week, it will help you solidify your sleeping and waking up patterns.

Plan your breakfast in advance

I’m definitely one of those weird people who thinks about breakfast before I go to bed. I’m always excited about what I’ll be eating whether it’s an omelette or some yogurt and berries. If I haven’t got anything planned I’m like Whuuuttt, why bother getting out of bed at all today? And so, I’ve found that if you plan a yummy breakfast in advance, there’s something worth waking up to in the morning. Chances are if you’re going to be having a yummy bircher muesli, you’ll be jumping out of bed!

Ok so guys that’s what I did to learn to wake up earlier, I would love to hear if any of you guys have trouble with sleeping in and what you do to wake up early. After all, I’m not a master as yet 🙂

Do This Weekend: A Quick Hat Wall

Tips for Making A Gallery Wall with Cricut

How To Paint Furniture (And Why You Should!)